Ron Meadley had never planned for a quiet retirement.

“It just wasn’t practical nor was it the best for myself,” Meadley says. “I knew that it wouldn’t work.”

After serving in various managerial positions for tobacco and furniture companies, Meadley looked at his retirement as an opportunity to become proactive and give back to the community.

On April 15, Meadley was named ‘Good Citizen of the Year’ by the City of Surrey at the Annual Volunteer Services Celebration.

The spark to create an impact in his environment, he says, began when he tried to save an eroding island he was living on in Nova Scotia close to 40 years ago. Young Island, a glacial till island off Nova Scotia’s coast, was experiencing a loss of four to five inches of land per year as strong high tides would pull the gravel composition of the island away from its shores.

Seeing this, he thought of a way to prevent further erosion. For five years, by hand, he would roll boulders 20 to 30 feet to the water’s edge to create a 1,000-foot long protective wall.

He laughs at the memory, shaking his head and rubbing his hands on his worn denim jeans.

“It was completely crazy of me to do,” he admits, “but it was one of the first things that got me thinking, ‘How can I impact the natural environment around me?’ Up until that point, I was just working a regular job to get by.”

Meadley says that the highlight of his career has been teaching Surrey’s youth about the environment.

His face crinkles into a warm smile when he recalls all the children he’s led through the forests that edge his South Surrey home.

He gestures towards the sun-dappled window of his living room that looks over Sunnyside Acres Urban Forest.

“If you can bring the children through the forest and have them draw a leaf just the way it is,” he says.

“You give them something tangible they can actually touch with their hands and you can see the sparkle that’s in their eyes.”

Meadley has also worked with various teachers across Surrey to bring fish breeding into schools. Fertilized eggs are provided to classrooms by the Semiahmoo hatchery. After development, the children bring the fish back to Semiahmoo where they can learn more about salmon before releasing the young fish back into the river.

He describes the experience as something truly special.

“Once you give a child a bucket with fish that they can release back into the wild, you realize you’re giving them an experience they’ve never had before,” said Meadley.

Bi-annual community plantings have also revitalized Surrey’s forests and helped the society to connect with citizens of all ages who are interested in the environment.

“We have small shovels just for little folk,” he describes fondly of the plantings, “and these kids are so small that they can still barely lift them. It’s truly something to see.”

Through the society, Meadley says he has also built bonds with other retirees who, like him, didn’t see the end of the work week as the end of their productivity.

“There are a lot of seniors who want to continue to help and literally grow with the community,” said Meadley.

Jeff Harrison, Meadley’s neighbour, led the charge in nominating him as ‘Good Citizen of the Year’.

For years, Harrison had heard about all the work that Meadley had been doing for the community and decided to do something about it.

For three weeks, Harrison collected letters of recommendation from each of Meadley’s organizations before sending off the packet to the City of Surrey.

“I’m just happy that the city made the selection that they did,” says Harrison of Meadley’s award, “This man genuinely cares about his community and pours his entire retirement life into all of his projects. 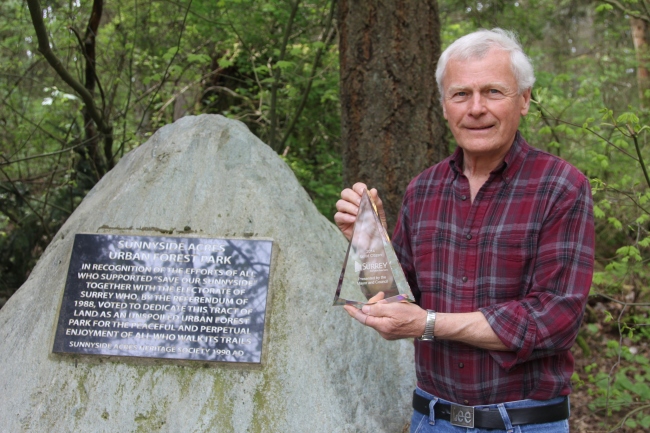